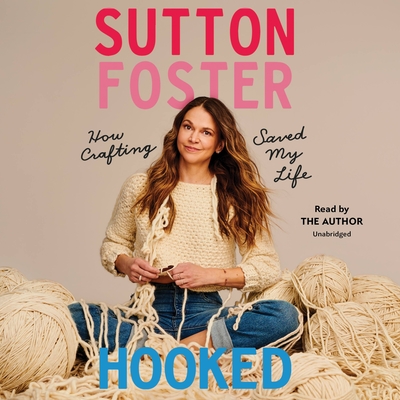 From the 2-time Tony Award-winner and the star of TV’s Younger, funny and intimate stories and reflections about how crafting has kept her sane while navigating the highs and lows of family, love, and show business (and how it can help you, too).

Whether she’s playing an “age-defying” book editor on television or dazzling audiences on the Broadway stage, Sutton Foster manages to make it all look easy. How? Crafting. From the moment she picked up a cross stitch needle to escape the bullying chorus girls in her early performing days, she was hooked. Cross stitching led to crocheting, crocheting led to collages, which led to drawing, and so much more. Channeling her emotions into her creations centered Sutton as she navigated the significant moments in her life and gave her tangible reminders of her experiences. Now, in this charming and poignant collection, Sutton shares those moments, including her fraught relationship with her agoraphobic mother;  a painful divorce splashed on the pages of the tabloids; her struggles with fertility; the thrills she found on the stage during hit plays like Thoroughly Modern Millie, Anything Goes, and Violet; her breakout TV role in Younger; and the joy of adopting her daughter, Emily. Accompanying the stories, Sutton has included crochet patterns, recipes, and so much more!

Witty and poignant, Hooked will leave readers entertained as well as inspire them to pick up their own cross stitch needles and paintbrushes.

Sutton Foster is an American actress, singer, and dancer. She is best known for her work on the Broadway stage, for which she has received two Tony Awards for Best Performance by a Leading Actress in a Musical. On television, Sutton played the lead role in the ABC Family comedy-drama Bunheads and has starred in TV Land's Younger since 2015.

“While filming the last season of Younger, I had the honor of witnessing Sutton’s writing process and watching her crack herself open to share the monumental moments in her life. She is talented beyond belief, a comfy home cook, a wonderful friend, and now a crafting and crochet teacher to all. Just like the rest of us, Sutton’s journey is beautiful and complicated, an intricate pattern woven one thread at a time. Be prepared to get hooked.”—Hilary Duff

"I have been a superfan of Sutton Foster ever since I watched her demolish the stage as the "Star to Be" in Annie but, after reading Hooked I feel like I finally met her. I will watch all of her future roles through a different lens because with this book she filled in the blanks and left this adoring audience member fully satisfied.  I had no idea Sutton's beauty was informed by such early heartbreak and I am grateful to have her example of resilience as a guiding light. And, shoot, it looks like I have to bust out the yarn after all."—Jennifer Garner

“Hooked is an inspiring memoir about overcoming fear, finding true love, and the healing power of art.”—Lauren Graham

"When I first worked with Sutton Foster on my show Bunheads she just seemed too good to be true. Brilliant, funny, professional and just wonderful on all fronts. I was immediately suspicious. How is this possible? Humanity doesn’t produce perfect people like this. There must be something very wrong. And then I spotted it. A bag of yarn and some knitting needles. She was a crafter! I knew it! I should’ve guessed that anyone that seemingly perfect had a hot glue gun stashed somewhere. Now as someone who truly has no talents to do anything crafty, I am deeply suspicious of those who bedazzle things and hand you handmade scarves at Christmas. Have these people never heard of Bloomingdales? But in all honesty, they were pretty great scarves. And then came the art shows. And I have to say – they were pretty great art shows. And then Sutton said she was going to write a book. A book about her crafting and how it helped her navigate her life. And I said sure. In all your spare time why not add a book to the mix. And then I read it. This book is much like Sutton herself. Warm, honest, funny, probably very helpful to those that actually wish to pick up the glue-gun, basically its own unique thing. So as someone who has gone from fan to friend to semi-stalker I highly recommend you find a great chair and spend some time in Sutton Foster’s weird, wonderful world. You’ll certainly love her stories. You might even cry a little. Or at the very least maybe you’ll come out of it with a great scarf. Merry Christmas."—Amy Sherman-Palladino